Over 170 CVIAQ members, their staff and invited guests gathered together at the Melbourne Hotel, West End on Wednesday 8th October to celebrate the achievements of some of the industry’s most talented apprentices at the 2014 CVIAQ Awards Night.

The event, in its format of a stand up cocktail style function, was well supported and well received by those that attended. The less formal style has ensured that tradesmen, apprentices and management all come along to support their colleagues who have been nominated for the awards.

The highlight of the evening was the announcement and presentation of the CVIAQ Apprentice of the Year Award. The 2014 award was won by Mr Fraser Hemming from Haulmark Trailers Australia. Sponsors of the Awards, Mr Doug Warby from Warby Tools and Mr Craig Carmody of National Transport Insurance were on stage to present the award to the winner and to say a few words in support of the competition. Fraser Hemming, who is due to be signed off for a Certificate 3 Automotive Manufacturing Technical Operations (Bus, Truck & Trailer), was presented with a trophy, a framed Award certificate, an Apple IPad and tools to the combined value of approximately $1,600.00.

The CVIAQ Apprentice of the Year Award is an annual award open to apprentices in the final stages of their training from the heavy vehicle repair, service and manufacturing sectors. The award, now in its thirty fourth year, is held in high regard by industry. 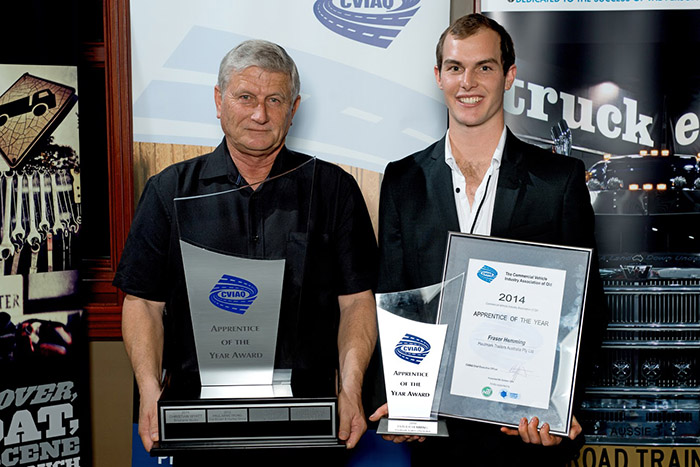 Haulmark Trailers is confident its new Adelaide manufacturing facility will help it better serve its southern client base as it... END_OF_DOCUMENT_TOKEN_TO_BE_REPLACED